Non-Stop HitMix with Love Me For A Reason by Osmonds 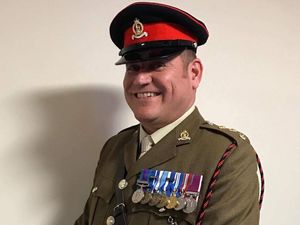 Linda Sprouting, from Denny near Falkirk, Scotland, told Sky News she felt the circumstances surrounding her husband’s death were "uncertain" in spite of an inquest finding that his death was "accidental".

Captain Dean Sprouting of Black Watch, 3rd Battalion, Royal Regiment of Scotland, was providing security for US forces at Al Asad airbase in Iraq when the incident happened in January 2018.

The 46-year-old had been out for a run on a sanctioned route when he was killed. He suffered multiple injuries.

"I think I could have accepted it more if Dean had died in combat because that is the nature of the job," Mrs Sprouting told Sky News.

"That’s the risk that they take. I would like get an honest, open, transparent conversation and an independent inquiry into what actually happened."

The US ambassador to the UK, Woody Johnson, told Mrs Sprouting in a letter that two US army generals and a US army safety board had concluded the situation was a "terrible, utterly heart-breaking accident," adding, "As such, no disciplinary action was deemed appropriate for the soldiers involved".

Mr Johnson went on to say that he hoped documentation requested by Mrs Sprouting would "offer a more complete picture of the tragic chain of events as they transpired that sad day" and said he would meet her at "a time that best fits your schedule".

Mrs Sprouting said: "We need to meet, we need to talk and try to come to a resolution. It’s about trust and gaining knowledge and with that we can get a positive out of it and make sure this sort of thing never happens again."

She said that Capt Sprouting, a father-of-two who had served in the army for 29 years, was "devoted to his job and his family."

She added: "The boys idolised him and we just miss him every day. It’s blown the dynamics of our family apart and it’s torn our world upside down."

The family of Harry Dunn, the teenager who was killed near RAF Croughton in Northamptonshire in a collision with American Anne Sacoolas, are supporting Mrs Sprouting.

Ms Sacoolas left the UK following the crash after claiming diplomatic immunity. They told Sky News they hope the US has learned from their handling of Harry’s case.

"I know they’ve been rocked by our ability to hold the Americans to account in the way they tried to kick Harry Dunn’s family into the long grass," the family’s spokesman Radd Seiger said.

"I’m hopeful they will have seen sense that this is a special relationship that we in the UK are good friends but when things go wrong you have to do the right thing."

The issue has been raised in Parliament by Mrs Sprouting’s MP, John McNally, who told Sky News: "My office and I continue to liaise with officials from the US Embassy, and the Ministry of Defence, to seek a resolution where Mrs Sprouting receives justice for the death of her husband, and to ensure that this doesn’t happen again to a family like hers.

"Lessons must be learned from this incident and justice delivered for the Sprouting family.

"UK service personnel, and their families, need to have the assurance that the UK will deliver justice if they, or their loved ones, were to unfortunately die while bravely serving our country."