Non-Stop HitMix with Reunited by Peaches And Herb

Coronavirus: Next chapter of life for 106-year-old who survived COVID-19 and Spanish flu 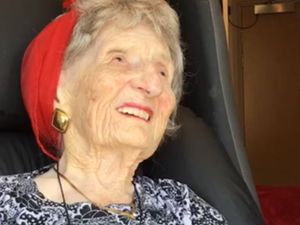 Freda Hodgson became unwell with suspected COVID-19 at the beginning of April. She had been sick, with a fever, a chest infection and had aches all over her body.

Living in a retirement village in Surrey, Freda’s family were especially concerned because they weren’t able to visit. But she has since made a full recovery.

In fact, she is now back to drinking her much loved brandy and ginger and is looking forward to seeing her granddaughter in person.

For now, she’s making do with video calls, which she insists are "the next best thing".

Freda is one of several centenarians who live in the Whiteley Village in Hersham, Surrey, a charitable care organisation set up in 1917 for older people with limited means.

Five residents have now successfully recovered from coronavirus, but it hasn’t been easy.

The Whiteley Village’s chief executive, Rachel Hill, said: "In the early days the information that was coming out was quite conflicting, particularly around PPE (personal protective equipment) where the policies were changing on an almost daily basis.

"With regards to finance, we are a charity. So like other charities up and down the country these are really difficult times for us at the moment.

"We’ve had to spend more than we had in our budget for things like PPE for example, but we’ve lost money from things like fundraising events and for the hire of our facilities that we often use to bring in more income to support us."

Freda has certainly lived a colourful life. She was born in 1913. As the daughter of a baronet, she had a privileged upbringing and was raised in a castle.

She had four children, and brought them up in what is now Zimbabwe, before fleeing the country with just a pound in her pocket.

They grew up to look like a collection of film stars, she says, but sadly only one is still alive.

Freda is no stranger to royalty and has even cooked for the Queen.

"It’s not regular cooking," she recalls.

"She had lamb chops. Two each. They were standing up against other bits of meat. There were big piles of different kind of vegetables, brussel sprouts, peas."

Dressed in a bright red hair tie, matching nail varnish and gold clip on earrings, you wouldn’t think that Freda was 106.

She has survived two world wars, one civil war, bankruptcy, the Spanish flu and now COVID-19. Her granddaughter, Natasha Hyde-Smith is understandably proud.

She said: "She has been through a lot, lots of sad things… but all of those have made her what she is; she is a very strong, determined, stoic lady and has a very good sense of humour.

"When gran was growing up, I don’t think she felt truly loved because of the generation… that’s why she had four children to bring love into her life."

Freda insists she is now looking forward to the next stage of her life. She is having a book published by Penguin, which will recount her life experiences over the last century.

(c) Sky News 2020: Coronavirus: Next chapter of life for 106-year-old who survived COVID-19 and Spanish flu