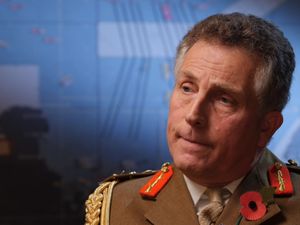 General Sir Nicholas Carter’s comments follow criticism from France’s president Emmanuel Macron that NATO was experiencing "brain death" and suffering from a lack of co-ordination and US unpredictability under President Donald Trump.

Sir Nicholas, who is the chief of defence staff, told Sky News’ defence correspondent Alistair Bunkall: "There are always tensions in alliances, it’s the same as a marriage."

But he dismissed other criticisms about whether NATO was relevant on the 30th anniversary of the fall of the Berlin wall.

Although the aftermath of the USSR’s collapse were optimistic days, today NATO has never been as important in the 70 years it has existed, Sir Nicholas told Sky News.

"We talk a lot about Russia, but what we also need to be conscious of are the threats to NATO’s southern flank, from the way Africa is revolving, from migration, and of course from terrorism as well," he said.

"The world has changed. We now have global competition between great powers, something we probably haven’t seen since the middle and early part of the last century.

"NATO’s relevance is now back where it was during the Cold War, because of the nature of that threat and the evolving strategic context."

Despite this, the alliance has been criticised not just by Emmanuel Macron, but also by Mr Trump, who has accused other NATO members of not contributing enough funding.

Asked if he believed these criticisms were slowly eating away at NATO, Sir Nicholas said: "No, I don’t think so.

"There are always tensions in alliances, it’s the same as a marriage, and the plain fact is with 29 nations it’s very important that we all come together and we all contribute to that alliance in a fair way.

"So I think it’s right that burden sharing is on the agenda," he added, noting that members were expected to aspire to spend 2% of their GDP on their militaries, and at least 20% of that figure on military equipment.