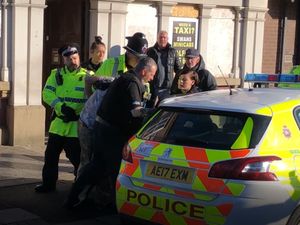 Hundreds were gathered at the cenotaph in Eccles, Salford, but as the Last Post played at 11am fireworks shot into the sky.

A man, believed to be a squatter, set them off while sat on a window ledge of a disused pub across the road.

Veterans shouted "Get him out!" as some tried to break down the door and others attempted to climb to the first-floor window.

A police officer blocked the door and shouted into his radio for reinforcements as he struggled to stop the crowd getting inside.

Traffic cones were also hurled up at the man, who disappeared back inside the window, before another man emerged and appeared to spit at the crowd.

More police arrived and rushed the man out of the pub in handcuffs and into the back of a patrol car, which sped away.

Officers stayed to guard the entrance to the pub because other people, also believed to be squatters, remained inside.

Police said a 38-year-old man had been arrested on suspicion of a public order offence.