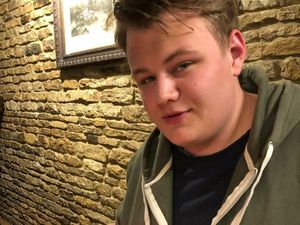 The family of Mr Dunn, a 19-year-old who died in a car collision outside RAF Croughton in August, are taking legal action against Foreign Secretary Dominic Raab.

They allege he misused or abused his power by granting the wife of a US diplomat, Anne Sacoolas, diplomatic immunity.

In an exclusive interview with Sky News, the family’s lawyer Mark Stephens said the Foreign Office was "trying to intimidate the family from having their case scrutinised by the courts".

Mr Stephens accused the British government of "acting like the lickspittles of Americans".

In a letter to the family, the Foreign Office said it would "oppose" and "seek costs" for any judicial review brought.

Anne Sacoolas is believed to have been driving on the wrong side of the road when her car hit and killed Harry Dunn.

The 42-year-old claimed diplomatic immunity after the fatal crash and later left the UK.

In the letter, the Foreign Office said the family have "not identified any reasonably arguable ground of legal challenge".

The Foreign Office letter said: "We therefore invite (Harry Dunn’s family) not to pursue the proposed claim. In the event that the claim is issued, it will be defended, the application for permission will be opposed, and the Secretary of State will seek his costs for doing so".

The family’s lawyer said: "I think the Foreign Office know they are in weak legal position that is why they are piling all the pressure on to try to intimidate the family.

"As far as the legal argument is concerned, what is clear is that the Vienna Convention on diplomatic immunity doesn’t apply.

"The British government provided a bare promise to the Americans that whilst their diplomats committed crimes in relation to their jobs they would have immunity, which doesn’t apply to his wife driving down the road.

"If you kill someone or your family kills someone diplomatic immunity doesn’t apply."

In a statement a Foreign Office spokesperson said: "We have deep sympathy for Harry’s family.

"We have done and will continue to do everything we properly can to ensure that justice is done.

"As the foreign secretary set out in parliament, the individual involved had diplomatic immunity whilst in the country under the Vienna Convention on Diplomatic Relations."