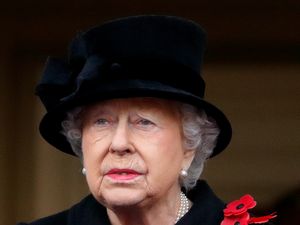 It is 100 years since the first two-minute silence was observed on Armistice Day on 11 November 1919.

The largest service on Remembrance Sunday took place on Whitehall in central London where thousands of armed forces personnel and veterans congregated.

The Royal Family led the tributes with Prince Charles laying a wreath at the Cenotaph, on behalf of his mother, the Queen.

The monarch, who was dressed in black, appeared to wipe away a tear as she watched the ceremony from a nearby balcony.

Princes William, Harry, Andrew and Edward along with Princess Anne also laid wreaths at the base of the memorial.

Kate and Camilla accompanied the Queen, while Meghan was on a separate balcony with Sophie, Countess of Wessex, and Anne’s husband, Vice Admiral Sir Tim Laurence.

Prime Minister Boris Johnson and Labour leader Jeremy Corbyn stood side by side during the commemorative proceedings.

An equerry laid a wreath on behalf of Prince Philip who was not present at the ceremony for the second year in a row after having retired from royal duties in 2017.

As Big Ben struck 11am, the two-minute silence was observed by thousands of poppy-wearers on Whitehall.

The firing of a gun by the King’s Troop Royal Horse Artillery, on Horse Guards Parade, marked the start and end of the period of reflection to remember those killed in conflicts past and present.

Over the White Cliffs of Dover, 750,000 bio-degradable poppies were released by a World War Two Dakota plane, flanked by two Spitfires, that flew 500ft (150 metres) above the Kent coastline.

People on social media have been paying tribute to their loved ones who served the country.

Former Liberal Democrat leader Tim Farron tweeted a photo of his uncle Maurice and his grandmother, with the message: "Marking the silence in Kendal and Grange today, my thoughts go to my Uncle Maurice, shot down and killed in 1940 aged just 19.

"His big sister, my Grandma pictured with him, remained heartbroken. We honour those who serve, never forgetting how much it cost them and their families."

Another Twitter user, Geraldine Marshall, posted a photo of her grandfather. She wrote: "Remembering my Grandpa today. He served on HMS Theseus in WW1 as a stoker. Age 20 in these pictures taken shortly after the Armistice. Serving in the navy allowed him to escape a lifetime of working in the South Wales coal pits."

Following the London ceremony, thousands of veterans and servicemen and women marched past the Cenotaph to honour the fallen.

London black cabs took veterans from train stations in the capital to Whitehall for free as a mark of thanks for their service, in what is a decade-long tradition.

Ceremonies also took place in towns and cities across the UK, including Edinburgh, Cardiff, Wigan, and Enniskillen, where 12 people were killed in an IRA poppy day blast in Northern Ireland in November 1987.