William and Kate reunite with Sussexes at remembrance festival [VIDEO] 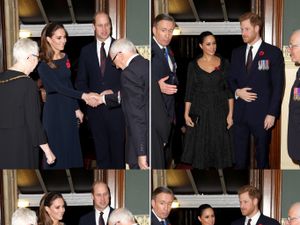 They were joined at the Royal Albert Hall by the Queen, the Prince of Wales and other senior members of the Royal Family.

The Duchess of Cornwall was also present after pulling out of engagements earlier in the week due to ill health.

William and Kate appeared in public with Harry and Meghan for the first time since the Sussexes opened up about their struggles in an emotional television documentary.

And they will be seen together again today at the Cenotaph in London.

During their recent official trip to southern Africa, the Duke and Duchess of Sussex shared a candid on-screen chat with ITV’s Tom Bradby.

The Duke of Sussex said he and brother William are now "on different paths" and have "good days" and "bad days" in their relationship.

Prince Andrew, the Earl and Countess of Wessex, the Princess Royal, the Duke and Duchess of Gloucester, the Duke of the Duke of Kent and Vice Admiral Sir Tim Laurence were also in attendance at the Royal Albert Hall.

Prime Minister Boris Johnson sat in a box next to the royals with his partner Carrie Symonds.

This year’s event marks 75 years since notable battles of 1944, including Monte Cassino, Kohima, Imphal and D-Day.

The ceremony is hosted by the Royal British Legion and commemorates all those who have lost their lives in conflicts.

A standing ovation was given to 44 veterans who represented those who served in the battles of 1944.

The event also celebrated the 100th anniversary of the Government Communications Headquarters (GCHQ), and paid tribute to RFA Mounts Bay which this year delivered supplies and aid to the Bahamas after Hurricane Dorian.

A video was played which showed the destruction of the hurricane and the aid provided by RFA Mounts Bay crew.

Festival presenter Huw Edwards described GCHQ as being at the forefront of intelligence gathering in the UK.

The mood fell sombre when The Last Post rang out in the theatre, and during the minutes of silence poppy petals drifted from the ceiling.

The service concluded with traditional prayers, hymns and blessings before an enthusiastic rendition of God Save the Queen.

The Queen waved to the crowd before leaving.