Non-Stop HitMix with Reunited by Peaches And Herb 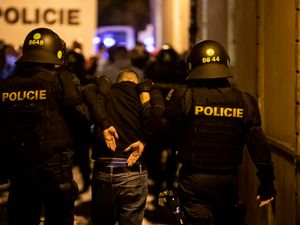 Thousands travelled to watch the Three Lions take on the Czech Republic in a Euro 2020 qualifier, a game they ultimately lost, but there were ugly scenes ahead of kick-off on Friday evening.

Police said 14 foreigners were among 31 people arrested after the pre-match violence, which left one England fan with head injuries that needed treatment.

Some supporters were seen throwing bottles at officers, who returned fire with stun grenades.

Afterwards, blood could be seen on the cobbled street where the man who was injured was pinned to the ground.

Travelling supporters had been warned to behave themselves, with a recorded message played in English urging them to "obey the law" and not wear face coverings or use pyrotechnics.

But trouble broke out soon after night fell, with many fans having spent the day drinking in the Old Town area ahead of the 8.45pm kick-off.

English fans were forced back through a small archway during the clashes, with about 10 men pinned into a corner and made to lie face down.

The clashes are likely to frustrate police in the UK, with a senior officer having pleaded with supporters to behave following incidents of anti-social behaviour during recent trips to Amsterdam, Dortmund and Porto.

Asked about how disappointing the violence was, England manager Gareth Southgate said: "Of course, always disappointing and I think I’ve always spoken about how we would want everybody to conduct themselves.

"But equally, tonight, I think everybody would expect me to focus on getting my job right and make sure that I get the performance that we need from the team.

"So, I think some of these things are for other people to deal with. I’ve got to make sure the results and the performances are correct and we didn’t do that tonight."

The Football Association had also asked supporters to "report that idiot" if they see anti-social behaviour, especially as the fixture coincided with a national day of mourning for famous Czech singer Karel Gott.

The celebrated artist died last week and England fans who travelled to Prague, which has a reputation as party city, were asked to be respectful.

England ended up disappointing the almost 3,800 fans who bought tickets for the match, losing 2-1 to the hosts when a win would have secured qualification for the tournament next summer.

Harry Kane put England ahead with an early penalty, but an equaliser quickly followed before the Czechs scored the winner just four minutes from time.

It was the first time England had lost a World Cup or European Championships qualifying match for 10 years.

Southgate will expect his side to bounce back done when they play in Bulgaria on Monday.