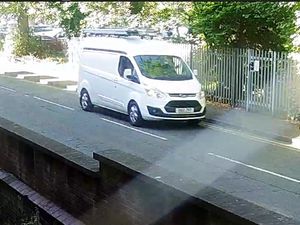 The incident, which happened on 2 September near Shrub Hill Retail Park on Tallow Hill, left the infant with reddening to the face, while the mother was left shaken.

A second incident of egg throwing reported a short while later left a man in his 30s with minor injuries.

He had been walking with his 15-month-old daughter in a pushchair along Midland Road when he was hit in the stomach by the projectile.

In response, West Mercia Police said it would not tolerate "senseless behaviour" and promised to patrol the area to ensure such an attack is not repeated.

An appeal has since been launched to help identify the driver of a white van who is believed to have information vital to the investigation.

"We continue to investigate the circumstances surrounding both incidents and I would urge the owner of the white van or anyone with any information that could help with our enquiries to please get in touch," the force said in a statement.

Anyone who recognises the vehicle or has any information that could help with the inquiry is asked to contact police on 101.

Get on Board the SOUL TRAIN with Ashley Harvey !! Two hours of great  sweet soul  memories.