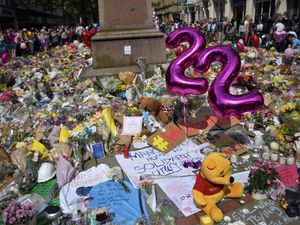 He cited a risk to national security.

He is now likely to ask to convert the inquest process into a public inquiry, which allows for secret hearings.

It will be the first time an inquiry into a terrorist attack since 9/11 has happened partly behind closed doors. The decision means the families will never know the full details of why MI5 failed to stop the attack.

The Manchester Arena bombing killed 22 people at an Ariana Grande concert in May 2017.

In his ruling the coroner said the material he had excluded was "relevant and central to the matters that fall to be investigated".

"Accordingly, my provisional view is that an adequate investigation, addressing fully the statutory questions…could not be conducted within the framework of the inquests."

The ruling means the coroner will either have to halt the inquest procedure or carry it out as a public inquiry.

In an unusual move, the home secretary has already made clear she would accept a request for a public inquiry, although that could significantly lengthen the inquest process.

Steve Howe, who lost his wife Alison in the bombing, said he was "very annoyed and disappointed" by the decision.

"It is a cover-up, right from day one," he said. "I know they are saying this information will safeguard the public, but it would also shed some light for the families."

John Cooper QC, representing the families of 11 of the victims, told a hearing last week that the secrecy application had come from "the very people who could potentially be severely criticised" in the inquest.

He said the culpability of both the security service and police were both open to "severe analysis with potentially severe and critical consequences".

Mr Cooper said the secrecy applications were "very important" for the families and "go to the root of understanding what happened to their loved ones as well as a wider public understanding".

In his ruling on Friday, the coroner said he had upheld the home secretary’s application for public interest immunity because "to make public those matters would assist terrorists in carrying out the sort of atrocities committed in Manchester and would make it less likely that the Security Service and CT [counter-terrorism] police would be able to prevent them".

Mr Cooper had made it clear that they were only interested in what information MI5 and the police had at the time and not how they obtained it.

However, the coroner said that it was not possible to give the gist of the information without also affecting national security because the sources and the information were "too inextricably linked".

The parliamentary Intelligence and Security Committee released a heavily redacted report after the bombings, a process carried out by MI5. However the coroner suggested the committee had redacted it themselves on similar grounds.

(c) Sky News 2019: Coroner will not go ahead with hearings into Manchester Arena deaths